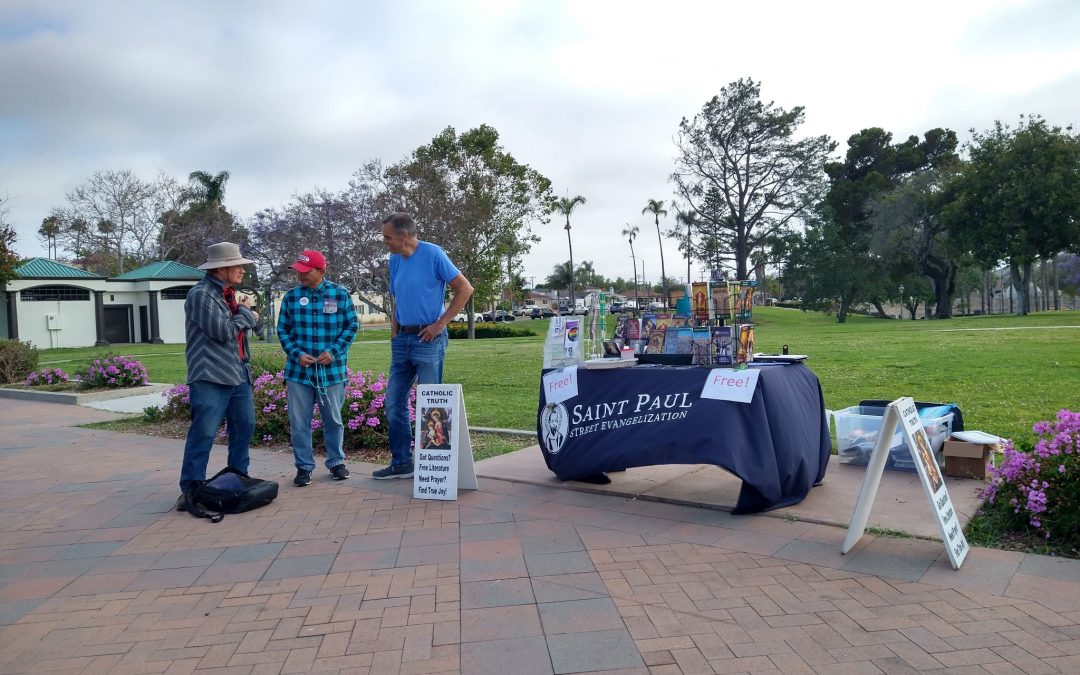 We set up on 3rd Ave., on our second outing, in what we already call our ‘regular spot.’ Again traffic seemed light but once the table was ready, a nice flow of people began walking by. We were joined by 2 new evangelists, Walter and Andres.
We began chatting and handing out pamphlets. We spoke to a gentleman who goes to a local evangelical church because he just wants to ‘follow the Bible’. He had never really thought about where the Bible comes from or which of the many denominations interpret it correctly. We gave him pamphlets on reasons to be Catholic and the Bible alone.

Another guy stopped to tell us that he left the Catholic Church because of the ‘false teaching’ some of his beliefs were confusing like his disagreement with the Trinity because he only believes in ‘one God’. I tried explaining that belief in one God is exactly what the Trinity confirms but obviously God hasn’t given him ears to listen yet. We agreed to disagree for now but ended by confirming that we both love Jesus.
A group of scantily-clad teenage girls walked by. We asked them if they would like to talk about Jesus and they responded, “worship the Devil!” I’m sure they don’t understand the gravity of what they were saying but still, as a Dad of two girls, it makes me sad to think of how lost they must be to say something like that.

We are already seeing the fruits of being in the same time and place, we saw a couple of familiar faces from last week. One of our evangelists was feeling guilty about an encounter with a Protestant pastor, it ended with him walking away a little angry. This week the pastor came by again and we were able to shake his hand and start the relationship over, which felt really good. We have now committed to a weekly outing in Chula Vista, the Holy Spirit Is doing great things in Chula Vista!