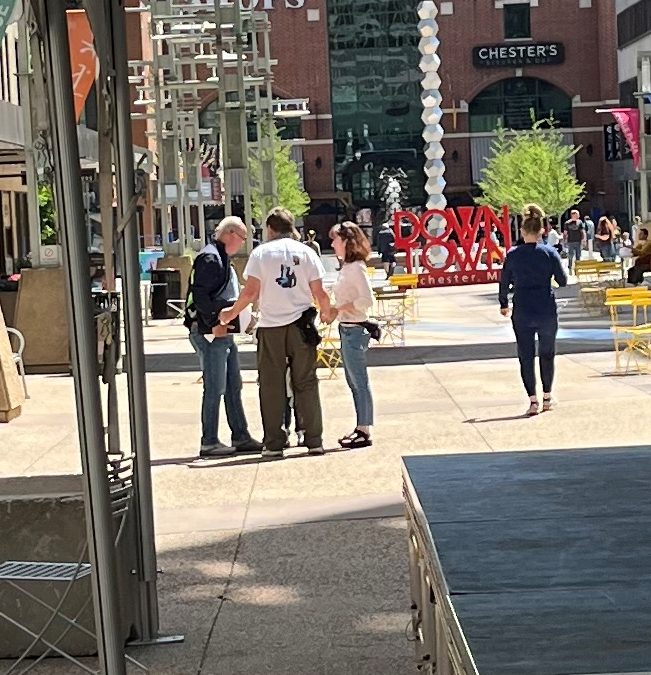 Wow! The Holy Spirit was alive and moving at the Peace Plaza outside the Mayo Clinic today. We had hardly gotten there, and I took out the Ask a Priest sign, (which mentions Confession) and a man asked if he could go to Confession. Not long after that, another man asked about Confession and told me he was Catholic but hadn’t ever been to Confession. I told him Father would walk him through it. He waited while Father finished with the first man, then he went to Confession. A family from New Zealand also wanted counseling from Father. While Confession was going on, our evangelists, Tom and Jenny, were walking through the Plaza, praying with people.

One 80-year-old man, (Tom called him the man with the crosses), and his wife stopped to talk. The man had respiratory issues, vein issues, and blood clots that all showed up in the past year. He initially didn’t say much. His wife was very outgoing, and he kept referring to her as the prayer warrior. Tom prayed over his chest to ask God to remove this affliction in the name of Jesus. We noticed he had 3 crosses on his neck chain and asked him about them. He said they are for friends of his. Then he pulled out another six crosses from his pocket and said he carries them with him always to essentially pray for his friends, one for each cross. We were able to give him a blessed crucifix that had been touched to the cross of Christ.

Another lady from Idaho came to the clinic to treat scoliosis. She was about 50 years old, had surgery when she was 16, and had two more surgeries but the last one hurt more than helped. Mayo doctors told her there was nothing else they could do. We asked her what we should pray for and, through tears, she said we should pray for all the ‘worse off’ people she saw in the clinic.