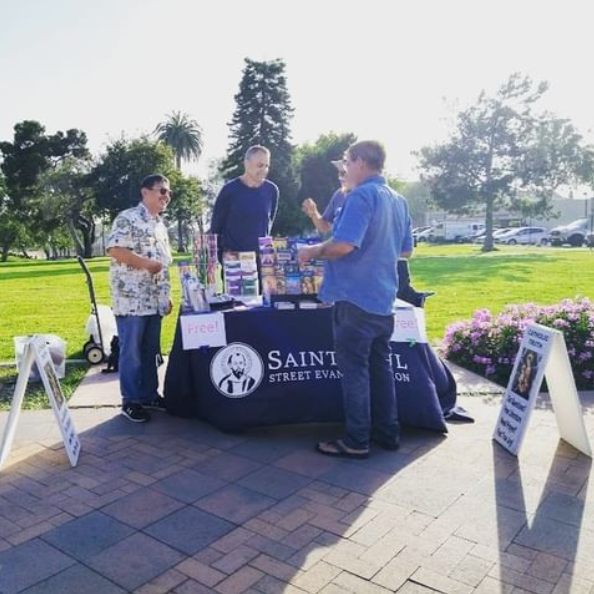 There seemed to be a bit of a strange cloud over our outing yesterday. I arrived late and was feeling flustered about that and stressed about events in my life. The team informed me that while they were setting up a guy came by yelling his objections to the Catholic Church. However, despite the forces of evil apparently trying to put a damper on our activities, which is what I believe was happening, we still managed to have some productive conversations. My favorite was with a fellow Christian that goes to a Calvary Chapel church. He said that he has never been invited to a Catholic Church, so our evangelist, Andres formally invited him to attend Mass with him at St, Charles, a church close to where they both live. I also offered ‘one good reason’ why I am a Catholic and that was because on March 13th, 2013, many news agencies around the world had a similar headline story that day. They all reported something like – ‘Pope Francis is Elected as the 266th Leader of the Catholic Church.’ I asked our friend what the significance of this was? He wasn’t sure where I was heading so I explained that it shows that even the secular world knows that the Roman Catholic Church is almost 2,000 years old and today, is led by the 265th successor to St. Peter. He agreed and said that the Catholic Church is the Original Christian church, that made me happy because it was the discovery of that historical fact that started me down the path to becoming a Catholic many years ago and I pray that it will do the same for him. We were also blessed to, once again, have a new evangelist join our team!