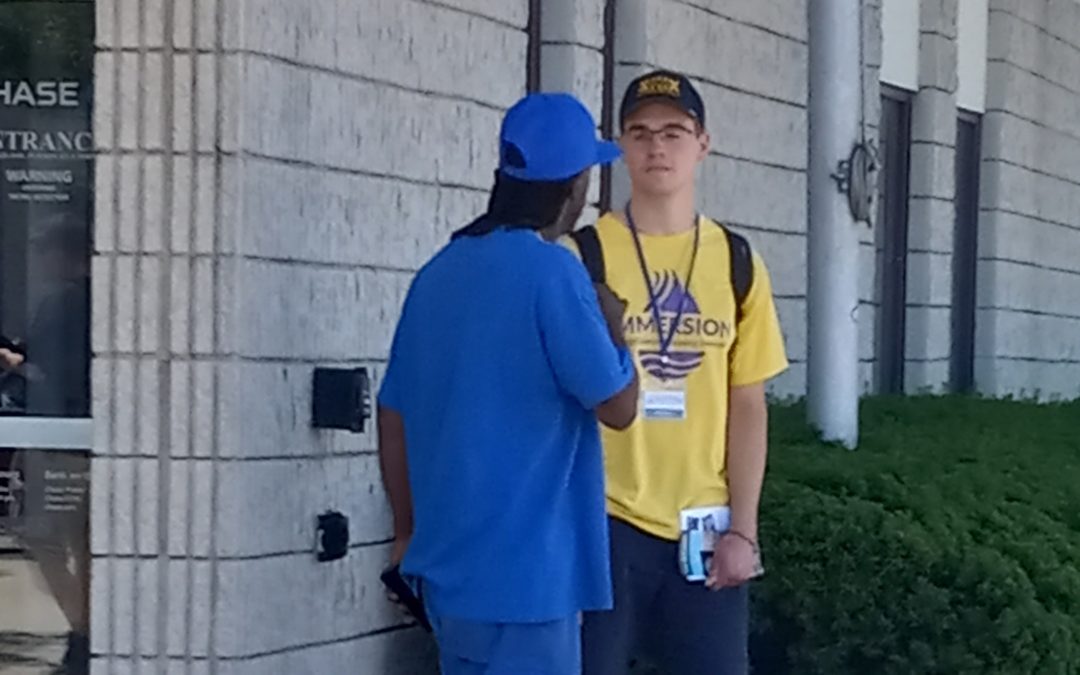 Nearly 80 evangelists attended the recent Immersion evangelization conference and at least a dozen of us talked to one particular man several times throughout the day last Saturday. I first saw the man, who calls himself “Main Street” when he was talking to Karl, a seminarian, at the farmer’s market in the morning. The two talked for several minutes when another team of evangelists approached and said that they talked to him earlier.
\
In the evening at our Light the Fire event, I saw him again talking to another group of evangelists across the street. I approached and asked Main Street if it was a coincidence that he talked to so many evangelists in two different areas, in the morning and evening of the same day. I told him that it was a “divine appointment” and it was clear that God wanted us to talk to him. However, he definitely had too much to drink and I wouldn’t invite him into the church for that reason alone. I tried to direct the conversation towards faith but he kept turning back to alcohol and sex. In the middle of our conversation, he stopped and catcalled a woman passing by. Once I got his attention back, I warned him against lust and alcohol abuse, quoting 1 Corinthians 6:9-10, but it was clear that his heart and mind were not in the right place. I walked away but kept an eye on him.

A few minutes later, he turned and staggered into oncoming traffic, almost hit by two cars that had a green light. He staggered towards the open church but a greeter and two security guards stopped him. They talked for a few minutes before Main Street became angry and shouted obscenities. It certainly caused a scene but it didn’t seem to interrupt the other evangelists who were talking to other people. Pray that Main Street would turn to the Lord and repent of abuse and sins of the flesh.