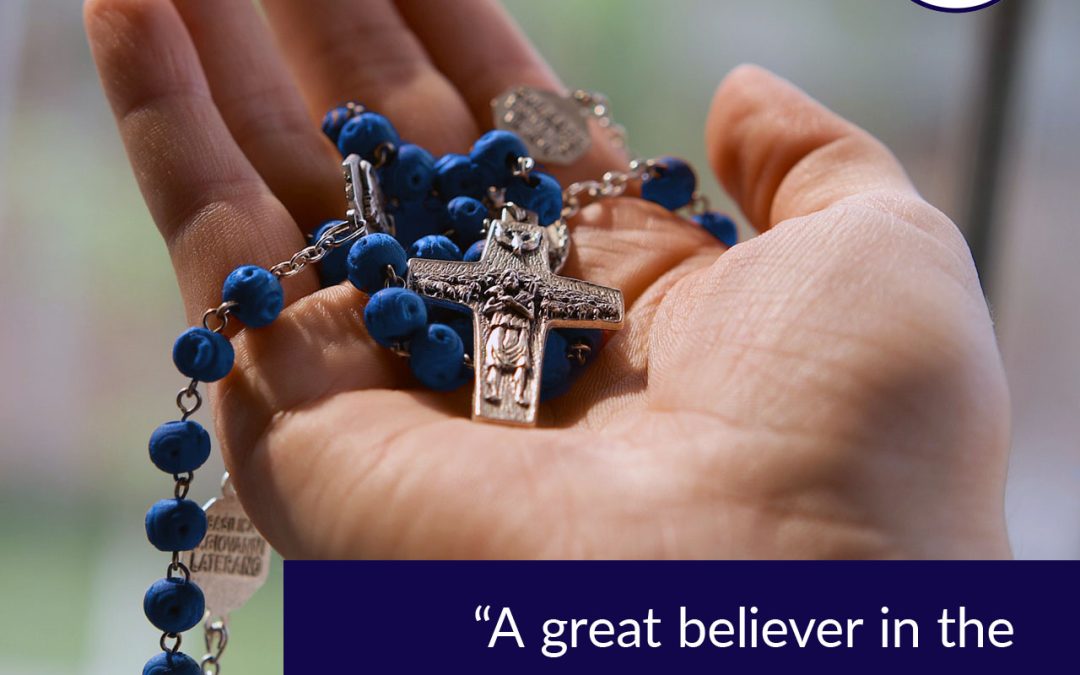 A Catholic grandmother stopped, accompanied by two of her grandchildren, who were in their late teens or early 20s. She was already a great believer in the power of praying the Rosary. After the grandchildren had each made their choice of a Rosary, the grandmother volunteered this “Rosary story”: Her father was in the hospital and doing poorly. His blood work was “all over the place.” The doctors weren’t sure what was wrong, but said he should probably have surgery. But the family thought he was too frail to survive an operation. They gathered in his room and prayed the Rosary together. Just as they finished the last prayer, the doctor came in again. He said he “didn’t know what to think. The latest set of bloodwork had just come in, and surgery was no longer indicated. In fact, their father could go home.” Praise be to God!

Some teens, perhaps 13-14 years old, were noisily careening around the cobblestones on their skateboards. After about half an hour of this, one of them headed to our table, the others following. All but one claimed they were Christian. I handed the nonbeliever a copy of the kerygma, and also encouraged him to actually pray the Rosary, at the same time thinking about Who Jesus Is and what He has done for him. She described the peace and protection that many experience, even if all they have is questions. They all seemed willing to try it.

Two 20-something women stopped. One admitted she practiced a non-Christian style of spirituality. She had a question, though, about why God answers some prayers and not others, or more specifically, why He helps some people but not others. I explained that God always loves us and knows what we need the most, that even suffering and death are not the worst of evils. She offered her a copy of our pamphlet on “Suffering” (as well as a copy of the kerygma). She and her companion also each chose a Rosary for herself. Then they expressed interest in attending a church, just to see what it was about. I happily gave them a copy of our map to area parishes. But then they asked how they were to dress. I explained that people show up wearing many different styles, a large number of them dressed casually, saying that only swimwear was actually frowned upon. But then she took a second look at their outfits. Both girls were wearing long-sleeved tops and shorts, and their shorts were, well, awfully short. She suggested they wear something slightly longer. They seemed okay with that. Please pray that the Real Presence of Our Lord in Catholic churches draws them all the way into full communion with the Faith.