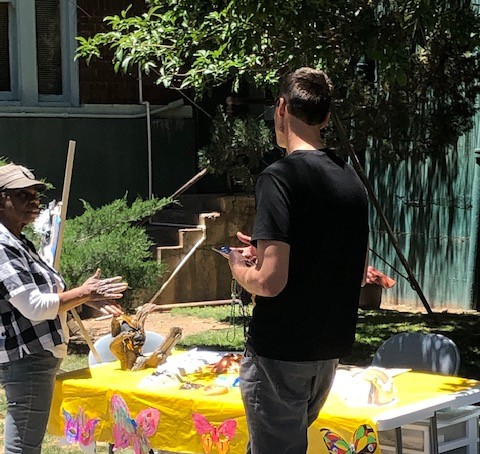 We had a very busy day in Southern Arizona on Saturday. Prayer at 5:30 AM and then helped an elderly family move with the K of C to a cheaper location and then drove to Bisbee to evangelize. Mitch joined us for the first time and did a fantastic job, handing out many Rosaries and medals and pamphlets. He is the daily Sacristan at St. Patrick in Bisbee.

Robert spoke to a lady with a table behind us selling molds of faces and hands. He spoke to her for a long time and she took many pamphlets and said she would listen to the talks on my business card. One driver pulled up in a sort of double parked position and yelled through his window, “IS THAT CATHOLIC STUFF?” Yes, we replied. “Can I get all you have?” So we put together one pamphlet each and medals and a Rosary and gave it to him to go.

Then we drove to Tombstone to evangelize at Wyatt Earp Days. There, a family with five children came up to us and took Rosaries and pamphlets. Ed asked what church they belong to and they said they were Baptists. Ed told her that it started in 1632 and that the Catholic Church started in 33 AD. Ed told her the story of St. Ignatius of Antioch who was Bishop of Antioch and was taught by the Apostle John. Ignatius got captured and when riding to Rome to be eaten by lions. On the way he wrote seven letters to his seven churches he oversaw. In 107 AD, he wrote to the Smyrneans: “Where the Bishop is, there is Jesus Christ and there is the Catholic Church.” She said, “WOW, I did not know that!” She took my card, some pamphlets, and said goodbye.