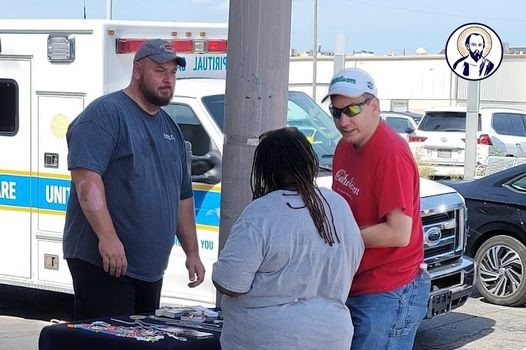 This report comes from team leader Mark with the Eastern Market SPSE team in Detroit:

Bob, Steve, and I evangelized at Eastern Market last Saturday. There was a political group standing at the same corner that we usually evangelize. They were fairly loud and vocal and I was afraid that they might scare people away from our table. However, that fear never materialized.

One of the two people declined the gift of a rosary but remained polite and friendly the rest of the time. The other one was eager to accept a Rosary. She said that her family is Catholic and she has fond memories of a departed aunt who was a religious sister. She said that her aunt was the kindest and most loving person that she ever knew, and she has a good perception of the Catholic Church because of her aunt’s witness. I said that if the Catholic Faith is so important to her family and so important to her beloved aunt, then she should seriously consider it for herself. She agreed and accepted a Miraculous Medal as well as several pamphlets and holy cards. She declined our offer to pray with her but we will certainly for her reversion to the Catholic Church, inspired by the Holy Spirit and the good example of her religious aunt.

There were a few people who emphatically declined the offer of a free rosary and quickly walked away. Pray that they may open their heart to the Good News of Jesus Christ and His Church. We talked to several other people, including one Protestant evangelist who took a keen interest in our Spiritual Care Unit. He talked far more than he listened but accepted a Rosary, Miraculous Medal, and Why Be Catholic pamphlet.