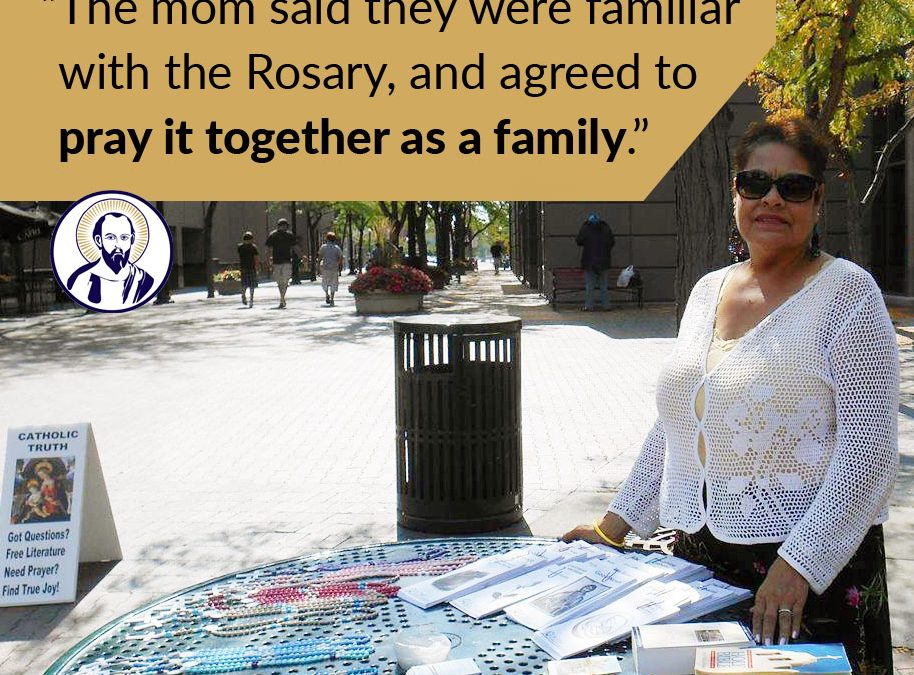 Despite a secular holiday looming the next day, we had a variety of visitors.

A middle-aged woman stopped for a Rosary, saying she knew what it was but wanted to know more. So, I explained the worth and promise of the prayer. Not Catholic, our visitor was the first ever to mention the Supreme Court’s Roe v Wade reversal. She assumed we were happy about it. We said we were, but it was only the beginning of what needs to be done. She said she did not like the court’s decision, and wondered if we were in favor of states helping pregnant mothers after they had given birth. We agreed that was important, along with the welfare of the newborn child. She took a Rosary, the pamphlet on how to pray it, and a Divine Mercy prayer card. She seemed to have more to say but went on her way instead. Pray that her heart softens toward the unborn.

A group of 2-3 boys in their mid-teens came over in response to the word “free.” They stayed to listen to a quick explanation of the Rosary, but their attitude was barely polite.
A multi-family group was exiting the hockey arena when they heard us offer a free Rosary. A woman with two young girls in costume broke away from the group and came to the table so the girls could get Rosaries. The mom said they were already familiar with the Rosary, and agreed to pray it together as a family.

Altogether, the two evangelists gave away 20-25 Rosaries and its pamphlet, 1 map to area parishes, 1-2 Divine Mercy prayer cards, and 2-3 copies of the kerygma.