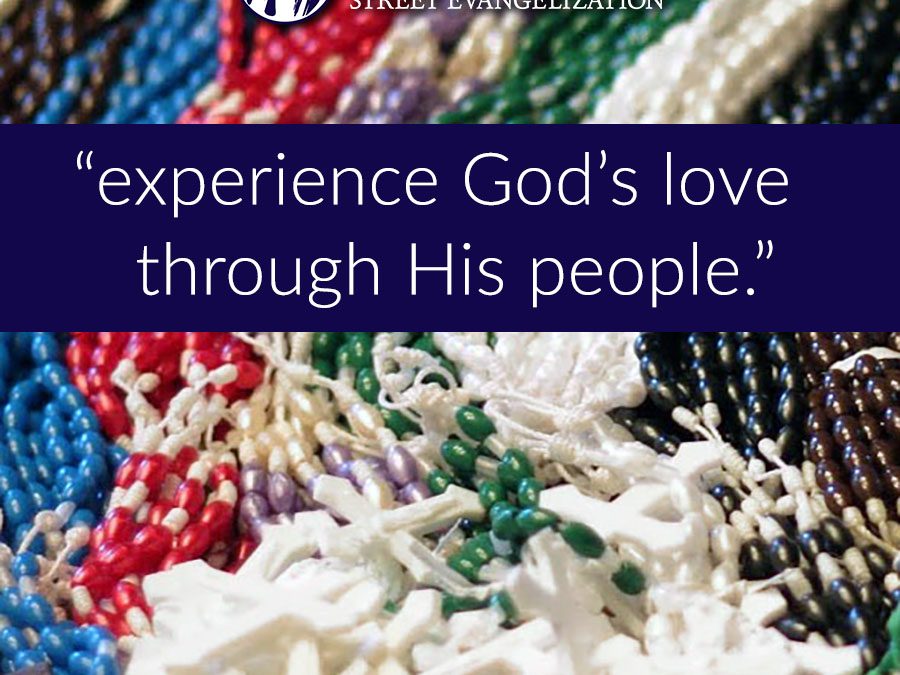 The following report comes to us from team leader Alpa with our Immaculate Conception parish team in Somerville, NJ:

On a cold and dark Saturday afternoon, we were back on Main Street. With God’s Divine Providence, we expanded the Street Evangelization Team from just three to five evangelists and three Prayer Warriors, one of whom is a Spanish speaker, which this team needed desperately! God is so good! The three prayer warriors met in the chapel and prayed for the people that we’d encounter, that their hearts be opened to the promptings of the Holy Spirit. With the expanded team, the evangelists went out and were able to set up two tables on opposite sides of the street.

We met lots of people who took rosaries and with whom we had passing encounters. The following meetings were a bit more in depth. We had a man who asked for prayers for his family. Ingrid, our Spanish speaking evangelist, was kept busy the whole time, and she prayed with this man. Jim, another evangelist, so beautifully approached those who are on the margins, and he spoke to one man who was clearly down on his luck. We prayed with him for warmth and to experience God’s love through His people. Mary Ann prayed with another man who asked for success at rehab/Salvation Army’s program. A large family of three young kids, a mom and dad and grandmother asked to pray for a dear friend’s son who was in the hospital with headaches and a possible tumor. The family was touched and took a picture of the booth to send to the friend. We spoke to a couple—the man didn’t want to talk and kept his distance—but the woman was a lapsed Catholic. We spoke to her about church, why we go, and how she could go to the nearest church to pray. I also spoke to her about Confession and why it’s important to go after being away for a while. We spoke to another man who took many of our pamphlets and we prayed together for a good life and future for him. We spoke to a spry elderly woman who frequently goes to a shrine that’s a half an hour away from her home. When I asked if she goes to mass every Sunday, she said no, she only goes when she makes the trip to the Shrine. We spoke at length about her family life, her fallen-away grandchildren, etc. And she was open to going to our parish on Sundays when she doesn’t go to the shrine. We spoke to another woman who was new to the country and she asked for prayers. We had one group of women and young children initially refuse our offer of a rosary and medals, only to go to the other side of the street and request them because their children wanted them! A woman who had seen us in the past, came out of her apartment in the cold to ask for prayers and a parish bulletin. Mary Ann led us in a beautiful prayer for the woman.

In closing, in Jim’s words, “Dear Savior, be with [your loved ones on the street] this moment, us, too….how we all need You”. Please keep all of those that we meet on the street in your prayers, especially as the weather gets colder.