“Evangelizing at the Christmas Pageant, Pt. 1” 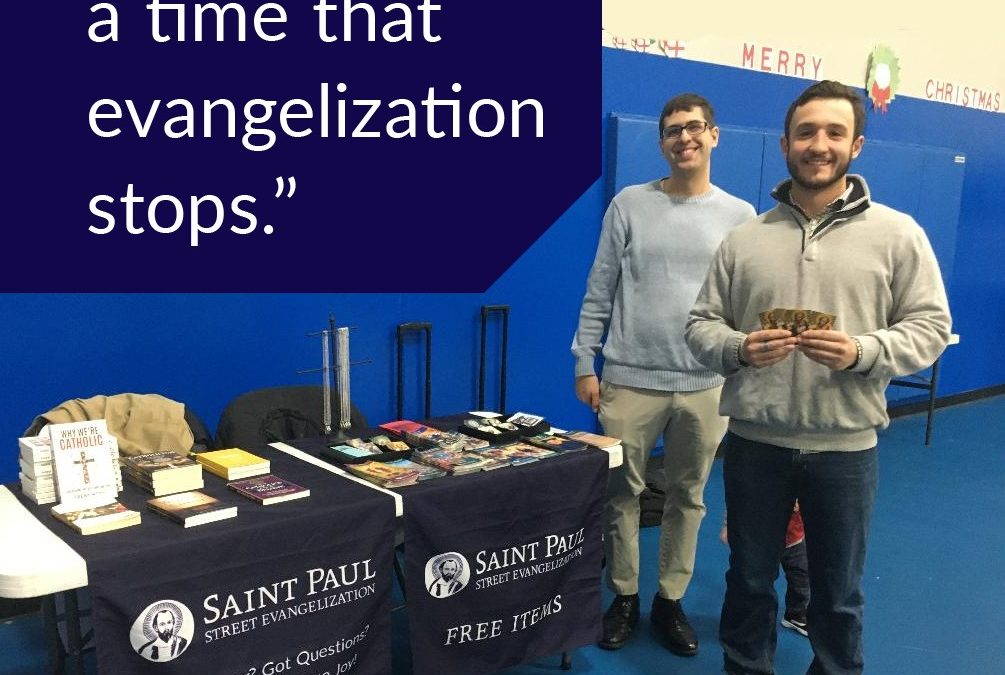 This report comes to us from evangelist Nick with our team in Joliet, IL:

There’s never a time that evangelization stops, and that holds true as we get into these frigid months of winter. What was notable about this last outing was where it took place, and certainly was the most unique outing we have ever had! Angela, one of our Station leaders, spoke with the principal of her sons’ Catholic grade school, Noonan Academy. In speaking with the principal, we were able to get a table in the back of the gym during the school’s Christmas pageant this past Saturday, and it was a wonderful experience! We met many faithful Catholics who needed to be built up, as well as those that have been away from the sacraments for some time, and those that aren’t yet in union with the one Church or Lord Jesus founded. Below are three testimonies from myself and our other two station leaders at the event:

“We tried out a new venue for evangelization this past weekend: the back of the gym during the Christmas performance at our local Catholic elementary school. It was a great success! We encountered lots of eager children wanting to show off their new medals and scapulars. Additionally, we had several good conversations with people who needed some encouragement in their faith journeys. One woman is going through RCIA now to receive her confirmation! After taking every pamphlet we had available, we offered her a copy of Trent Horn’s book “Why We’re Catholic”, which she happily accepted. We also gave away around 8 other copies of that book in this outing!” -Angela

“As Angela mentioned, we had many people wanting to take advantage of the literature and sacramentals being given away. All of the “Why We’re Catholic” books seen in the picture above were given away. We also gave out several “Youcats” [youth editions of the Catechism] to some of the older children that were present. Many of the children wanted miraculous medals, and medals of their other favorite saints. Especially popular were the “$1 billion” bills with Pope Francis on them, as well as various holy cards! One boy especially wanted a Divine Mercy holy card for his grandmother.