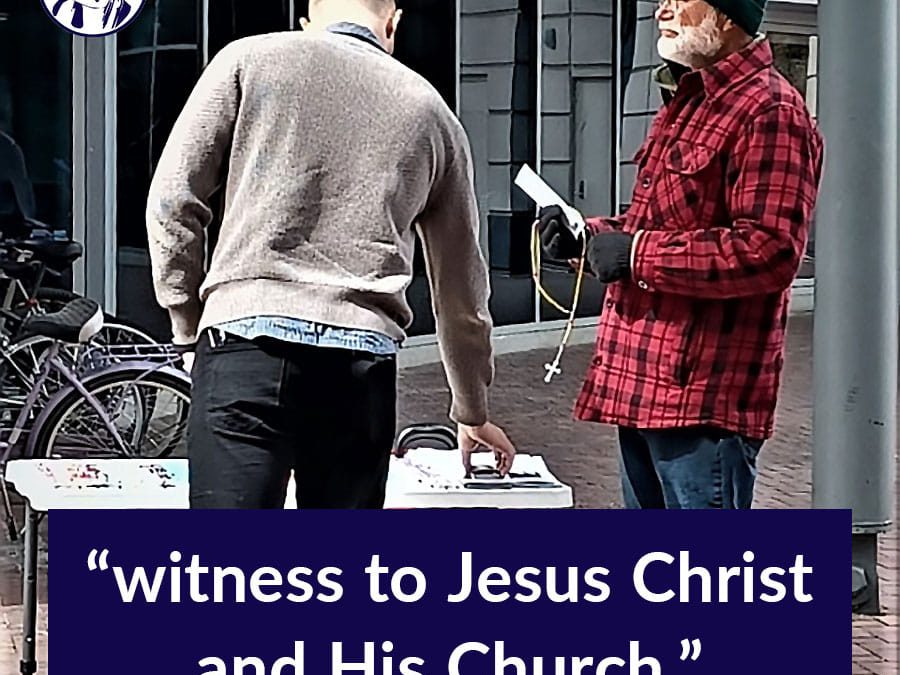 Our presence provides a wordless witness to Jesus Christ and His Church. As evidence, during nearly every session, people hurry past while calling out they’re already Catholic, or non-Catholic Christians, or believers, or were at least raised Christian. This happens even before we say a word.

Early in our last session, several groups of large and muscular college-aged men went by. One group stopped. They were football players, in town for a bowl game. Three out of the four men chose a Rosary. One was a non-Catholic Christian, “in love with the Lord.” He picked out a Rosary for his girlfriend, but listened as we encouraged him to actually seek Christ in the prayer. We wished them well in their game. Pray that their love for the Lord grows to fill their life.

A 30-something couple stopped because the man was curious about the Rosary and “what this is all about.” After explaining the how’s and why’s and the promise of the Rosary, he still declined to take one but he did praise us for being out during the Christmas season. We let him know we were there year round and have been for ten-plus years. We then went back to challenging him to take a Rosary and try the prayer, but he only agreed to take a how-to-pray-the-Rosary pamphlet and promised to pray for us. Pray they hear Christ saying to them, “Behold, your mother” (John 19:27:)

A perhaps-homeless woman, whose backpack sported a large combination lock, stopped for a Rosary and its pamphlet. She also asked for a plastic sandwich bag to put them in so they wouldn’t get dirty before she got a chance to pray it.